The Neolithic of South Sweden. TRB, GRK, and STR 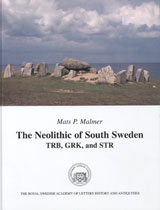 The Neolithic of South Sweden. TRB, GRK, and STR

The book deals with the wholly or partly agricultural Neolithic cultures in Sweden c. 4000–2400 BC. Because of the difficulty of surveying such a vast country as Sweden, much less is known internationally about the Neolithic of Sweden than, for instance, of Denmark.

Four chapters examine the first farming culture in the Early Neolithic (the TRB during the EN), the Middle Neolithic period (the TRB during the MNA), the Neolithic fisher-hunter-farmer culture (GRK) and the second farming culture (STR). The TRB and STR are perceived as parts of general Europe cultural currents and the GRK as a regression. The role played by migration was small. The fifth chapter is devoted to, among other things, the concepts of objectivity, actualism and archaeological culture.