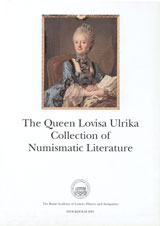 The complete catalogue of the Queen Lovisa Ulrika Collection of Numismatic Literature in the Library of the Royal Academy of Letters, History and Antiquities, Stockholm, is printed with bibliographic information, including descriptions of the bindings, and notes on the authors. Photograhic illustrations of the title pages accompany the bibliographic descriptions.The major part of the collection was brought together by Count Carl Gustaf Tessin in the early part of the eighteenth century and sold by him to Queen Lovisa Ulrika in the 1750s. Upon the death of the Queen's son, Gustav III, the books were moved to the Royal Museum in which the collections of coins and medals were kept, later to be transferred to the Academy Library. The collection is now housed in the Royal Coin Cabinet.