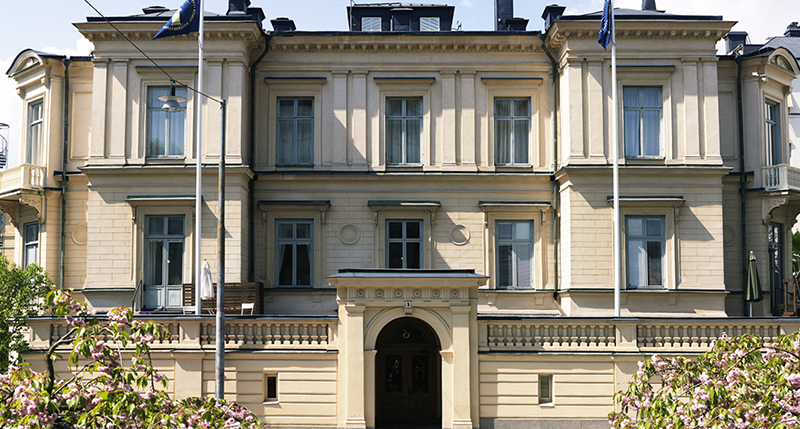 Rettig House was one of the first buildings when the Villastaden district in Stockholm was developed. It was built as mansion flats, unlike the surrounding town houses which gave their name to the street, Villagatan, and the district, Villastaden.

In the 1960s, Rettig House was donated to the Rettigska Foundation, which is managed by Vitterhetsakademien.

In the 1870s, a large, undeveloped area on the north-east outskirts of Stockholm was bought up by a private property developer, AB Stockholms Byggnadsförening. Inspired by other European cities, the plan was for a mansion district, ‘an oasis in a stony desert’, consisting of single-family houses set in private gardens. Rettig House at Villagatan 3 was not built with a front garden, however.

The mansion was designed in the fashionable classical style and built in 1878–1879 by the architect brothers Axel and Hjalmar Kumlien, who played a key part in developing the area north of the new National Library building. Anna Hierta-Retzius, women’s rights campaigner and daughter of the newspaperman Lars Johan Hierta, bought Rettig House once it was built. In 1899, Hjalmar Rettig, a senior civil servant, became its second owner. The historian Herbert Rettig inherited it from his father, and in a deed of gift (1954–1958) he and his wife Ing-Marie made over the property in Villagatan, Skånelaholm Castle, and a large donation of shares to Vitterhetsakademien. Herbert Rettig died in 1963. The donation became the Rettig Cultural Foundation, which is administered by Vitterhetsakademien.

Since 1973, Rettig House has been the home of the Royal Swedish Academy of Letters, History, and Antiquities. On 4 September 1973, Vitterhetsakademien held its first plenary meeting at Rettig House.

As stipulated in the original donation, the Rettig family apartment, decorated in a belle époque style, is kept unchanged, and may be visited by arrangement.