Cemetery 118 and Building Group 7 and Cemetery 115 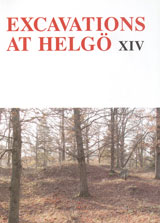 Cemetery 118 and Building Group 7 and Cemetery 115

This volume is devoted to Cemetery 118, the excavated remains of building Group 7 that underlay it, and a single grave from Cemetery 115 which was investigated under rescue conditions. Two-thirds of the burials on Cemetery 118 were excavated in 1976-1978; the remainder were left uninvestigated when the Helgö Project was closed down in autumn 1978.Julie Melin has here collated the excavation records to present all the available information about the cemetery and the settlement remains, and the single grave from Cemetery 115.Berit Sigvallius has done all the osteological work on the cemeteries and settlement, and in addition presents a comparison of the osteology from all previously published cemeteries on Helgö.