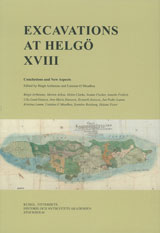 Helgö is a small island situated in south-eastern Mälaren. In prehistoric times it held a strategic position between two narrow straits in the main waterway leading to the districts settled by the Svear and to their central gathering place at Old Uppsala. The Helgö settlement has become famous because of its rich archaeological finds of exotic imports from the Roman Iron Age to the Viking Age, and of a vast production of cast bronze metalwork in the Migration Period.In this volume, the eighteenth and last volume of the series Excavations at Helgö, 13 researchers present the latest findings and add some new approaches to the results of the excavations carried out between 1954–1978. Earlier research, documented in 17 volumes, has mainly concentrated on the trading and manufacturing elements but here a synthesis is presented, where the hypothesis that the prime function of Helgö was as a pagan cult centre is advocated. Some of the other topics are: identification of a ritual enclosure, bread offerings at Helgö in the light of comparable cult sites from classical Antiquity, the chronology of the metalwork produced on the site, the vast assemblage of shattered glass vessels from the central hall-building, identification of fragments of a third C-bracteate of gold, the rich collection of medical equipment, a tiny Irish silver-inlaid and enamelled glass stud, one of the youngest finds from the site: a single German coin from 11th century, and finally a complete bibliography on Helgö research. An appendix correlates the site-recording systems quoted throughout the Excavations at Helgö series, the first volume of which was published exactly 50 years ago.Contributing authors: Birgit Arrhenius, Morten Axboe, Helen Clarke, Svante Fischer, Annette Frölich, Ann-Marie Hansson, Kenneth Jonsson, Jan Peder Lamm, Kristina Lamm, Ulla Lund Hansen, Uaininn O'Meadhra, Synnöve Reisborg, Helena Victor.