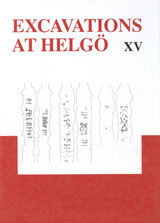 The weapons of iron found in the settlements at Helgö is the starting point for this treatise. These weapons, mainly consisting of parts of swords and spearheads, were found in building group 2 and could be characterized as high status weapons.

An important part of the treatise has been to define the technical components and levels in weapon manufacturing in the early Medieval period. A comparative material of swords and spearheads found in Svealand but also Gotland, Öland, Östergötland and Scania was chosen for further investigations. Around 500 weapons were irradiated to examine the different technical elements and iron qualities.

The earlier hypothesis that the weapons of the quality here discussed were produced in the workshops at Helgö is rejected.