The Pufendorf Lectures. Annotations from the teaching of Samuel Pufendorf 1672-1674 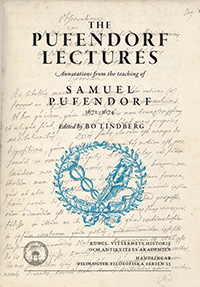 The Pufendorf Lectures. Annotations from the teaching of Samuel Pufendorf 1672-1674

Samuel Pufendorf (1632–1694), the famous theorist on natural law in 17th century Europe, was a professor at the University of Lund in Sweden from 1668 to 1676. At Lund he is commemorated every year in the Pufendorf Lectures given by renowned international scholars.This book contains his original thinking in the form of notes taken at the lectures on natural law Pufendorf delivered 1672–1674. No other texts from his teaching are extant. In his lectures Pufendorf commented on his own books on natural law, De jure naturae et gentium and De officio hominis et civis. The manuscripts show how innovative ideas are disseminated and filtered through academic culture. In the history of ideas, Pufendorf is connected with secularization, a modernized concept of the state, a kind of constructivist ontology, and humanity. While this is not untrue, here his thoughts appear in their immediate pedagogic context, where theological and political considerations, academic machinations and the difficulty of taking lecture notes obscure the coherence and consistency of his theory. Its main ideas and their potential are nevertheless discernible in the midst of the conflicts and trivia of academic culture. Bo Lindberg (ed.) is emeritus professor of the history of ideas at the University of Gothenburg.