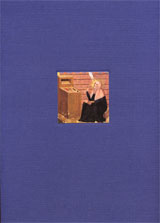 The formal proceedings for the canonisation of Birgitta Birgersdotter necessitated the production of manuscripts of her Reuelaciones celestes. The task of editing the texts had been entrusted to Alfonso of Jaen, who delivered the finished selection, arranged in seven Books, with additional material to a workshop in the Naples area.

The vellum manuscripts, sumptuously produced and beautifully illuminated by two masters and their assistants, were delivered to the members of the two successive canonisation commissions and to Kings, Queens and noblemen throughout Europe. Only three of these manuscripts are known to exist today. In August 1372, before the oldest manuscripts were produced, Niccolò di Tommaso had painted Birgitta having her vision of the Nativity of Christ in Bethlehem.

Imagines Sanctae Birgittae traces the history of the three Neapolitan manuscripts and analyses the composition and artistic embellishment of them and their copies. Niccolò’s three surviving panel paintings with the Nativity motif are also discussed and compared to his portraits of Queen Joan of Naples and some of her friends.