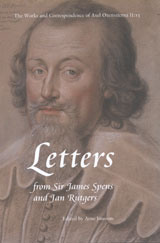 In 1612, when Oxenstierna took office, Sweden was on the verge of collapse. In the east, she was menaced by Muscovy, in the south-east by Poland, and in the west by Denmark. One of the means to save the Swedish realm was through active diplomacy.

Spens served as Swedish ambassador in London and as Stuart ambassador to Gustav II Adolf. He played an important part in the negotiations in 1624–1625, when statesmen and diplomats were focused on bringing the British, the Swedes, the Danes, and the Dutch into a grand alliance to defend the Protestant cause against the Habsburgs and the Catholics.

Rutgers served as Swedish representative in the Dutch Republic and as emissary to North German princes. His most dramatic mission was that to Prague in 1620, from where he reported in a series of letters on the Bohemian adventure of Elector Palatine Frederick V. Rutger’s letters give us an insight into his varied diplomatic activities and glimpses of Oxenstierna’s policies and diplomatic methods.

Spens’ and Rutgers’ letters are edited with introductions, summaries, notes and index in English. Two letters By Spens are in Scots.